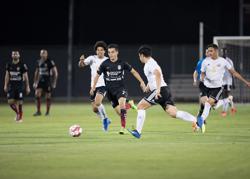 The Laredo Heat knew they had a difficult task in front of them Tuesday as they faced San Antonio FC at Toyota Field in the second round of the 2019 Lamar Hunt U.S. Open Cup. Unfortunately for the Heat, their Open Cup run ended as they fell to San Antonio 2-0 in the first meeting between the two.

San Antonio is a representative of the USL Championship League which is considered the second tier within the United State Soccer Federation. Not only that, but San Antonio has been competing since early March unlike Laredo, which has only been together as a team for about two weeks.

Despite the variables stacked against them, the Heat gave San Antonio a scare.

Both teams opened the game with chances to get on the board early. San Antonio had an opportunity in the ninth minute inside the box with a cross but a Laredo defender blocked the shot. Then three minutes later in the 12th, the Heat had a chance to get on the board off a corner kick but their shot went slightly left of the goal.

San Antonio finally got on the board in the 17th minute as Pascal Eboussi buried a header off a corner kick. Laredo had an opportunity to respond minutes later, but Francois Sakou was called offsides in the box with just the goalkeeper to beat.

Scoring subsided for over 20 minutes until San Antonio’s Ever Guzman dinked a shot off the crossbar in the 42nd minute to give his team a 2-0 lead right before halftime.

Despite suffering a backbreaker of a goal right before the break, the Heat didn’t quit. They gave San Antonio headaches for most of the game. However, as the contest wore down, so did Laredo. San Antonio being in the middle of USL Championship play benefited the squad in the match.

San Antonio had several chances in the second half to extend its lead. However, Heat goalkeeper Carlos Herrera came up with a handful of impressive saves.

This was the Heat’s second time competing in the U.S. Open Cup. Laredo last played in the United States’ national tournament back in 2014 when it made it all the way to fourth round before falling to the MLS’ Houston Dynamo 1-0.

While the Heat’s Open Cup run ended sooner than they wanted, a new run will begin Saturday as they open the National Premier Soccer League regular season. Laredo will begin NPSL play against Tyler FC at 8 p.m. Saturday at the Texas A&M International Soccer Complex.

The Heat had a remarkable start to their NPSL tenure last year as they finished the regular season a perfect 10-0 and went into the NPSL playoffs as the top overall seed out of 98 teams nationally. Unfortunately for Laredo, its run came to an end when it lost 2-1 to the Little Rock Rangers in the South Region semifinals — three games shy of the national championship.