The Laredo Heat SC is looking to head into the halfway point of the season on a high note as it travels for a rematch Wednesday with the Austin United FC and attempts to claim a fifth straight victory. 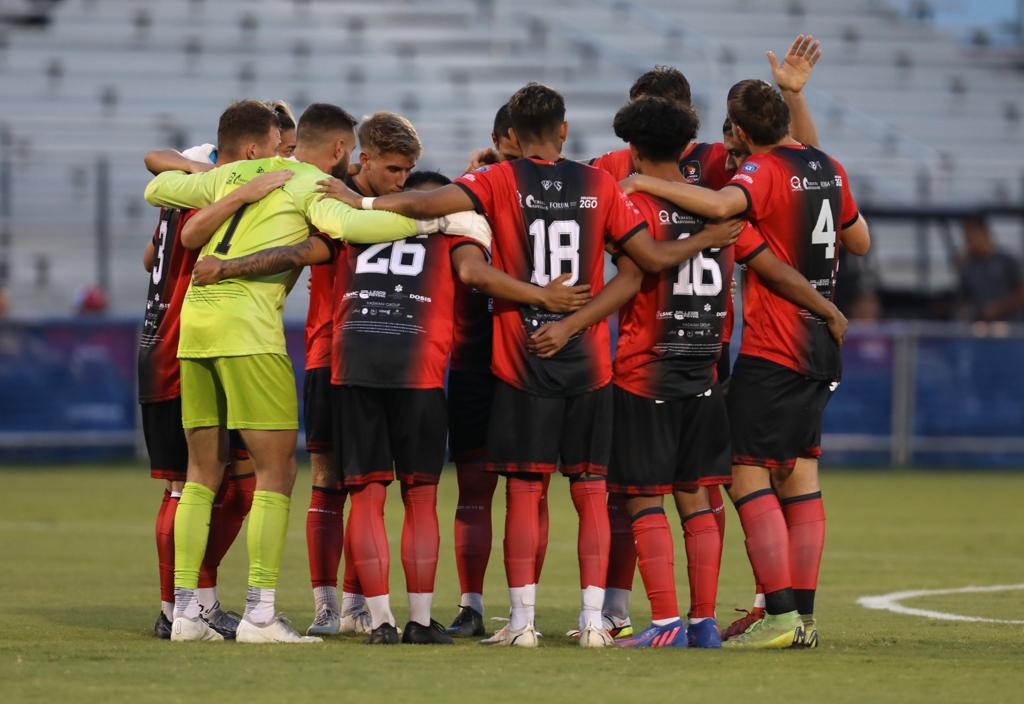 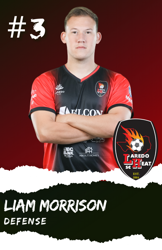 Heading into its sixth match in a span of 20 days to reach the midway point of the regular season, the Laredo Heat SC is focused on extending its winning streak to five games with a 6 p.m. match Wednesday in Round Rock against the Austin United FC before getting its first extended break.

“Every time you head into a break, you want to go in on a high,” Heat head coach John Powell said. “There is no greater high than three points on the road. We just want to keep our concentration and our focus as it has been since we got here and approach it like it’s any other game.”

The Heat (4-0-1, 13 points) are hitting the road for the second time in five days for their rematch with the Flyers following a 4-0 victory at the CF10 Houston FC (0-3-1, 1 point) on Saturday. After Houston received two red cards in the 26th minute, Laredo took care of business starting with a first-half header off a corner kick from center back and captain Lewis Wilson off a cross from Roberto Ordonez. It was his third goal off a header this season and his second game winner.

Laredo also got second-half goals from Kristian Colaci, Ruben Nielsen and Masaya Sekiguchi. Colaci leads the Heat with four goals on the year, and Ordonez has a team-high four assists after picking up two more Saturday. Sekiguchi continued to be a force off the bench as he scored shortly after subbing in for the second straight match.

“We have talked a lot about how I don’t know if we’ve had a complete 90-minute performance yet,” Powell said. “We’ve obviously had some very big wins and have four in a row. We’re in a good place, but we want to put together two 45-minute periods back-to-back. That’s our goal for Wednesday.”

The Heat have become second-half specialists over the past three matches. They have a narrow 3-1 edge in the first half but have routed teams 10-0 in the second half. The production has given them a two-goal lead on the Corinthians SC of San Antonio (4-0-1, 13 points) for the top offense in the conference with 16 goals scored, an average of 3.2 per game.

“The biggest thing for us that we’ve been talking about as a team is to not become complacent,” Powell said. “We’ve had opportunities in most of the games to make opponents pay early, and we’ve kind of let them off the hook and had to leave it for a little later in the match. We know this game is going to be completely different in complexity, but when we get our chances we’ll make sure we are finishing them and we are imposing ourselves on them early and often.”

Part of the second-half surge was the first matchup with Austin United FC (0-3-1, 1 point) as the Heat won 5-1 on May 24 at the TAMIU Soccer Complex. Laredo scored four goals in a half that lasted only 41 minutes as the game was called in the 86th minute due to inclement weather. However, it was a tight game until then as the Flyers scored on a penalty kick just before halftime to even the match at 1-1.

“Obviously playing a team the second time is harder,” Heat defender Liam Morrison said. “You learn from each other. But if the boys go and do their thing again like I know they will, I think we’ll come away with the three points.”

Morrison and the rest of the back four have helped Laredo lead the Lone Star Conference by a wide margin for the top defense allowing just 0.4 goals per game. The Denton Diablos FC (2-1-1, 7 points) is the next closest as it allows a goal per game. The Heat have posted three clean sheets in the past four matches with the lone goal allowed in that span being Austin’s penalty kick. The defense has been especially stout of late conceding just two corner kicks over the past three matches.

“The back four is starting to get a bit of chemistry between us,” Morrison said. “We are really well connected, and we don’t concede a lot of goals. That’s obviously a big part of football. If you don’t concede, you won’t lose the games. Then we just let our strikers go and do their thing, and they’ll win the games for us.”

Saturday’s victory gave the Heat the top goal differential in the entire National Premier Soccer League at plus-14. However, on Sunday they dropped to second as the Tulsa Athletic from the Heartland Conference picked up a 5-1 victory to improve to a plus-16 differential through six games. Laredo has a narrow edge in goal differential per game at 2.8 compared to 2.7, but the Duluth FC leads the NPSL in that category at 4.3 per game.

Regardless of the rest of the NPSL, the Heat are focused on continuing to rack up wins and dominating goal differential in the Lone Star Conference. The team is pushing to get homefield advantage in the playoffs after it narrowly missed out last year and had to travel to Denton for the conference championship. The Heat are tied for first place with the Corinthians SC of San Antonio, and they hold a 14-8 advantage in goal differential.

“We’re at a great point right now at the top of the table,” Morrison said. “That’s where we want to be. We need to go get another win and keep it going.”

Laredo can at least temporarily take outright possession of first place with a victory Wednesday as San Antonio is off until hosting the Fort Worth Vaqueros FC (1-3-0, 3 points) on Thursday and traveling to face Irving FC (2-1-3, 9 points) on Saturday.

After averaging just 2.8 off days between games up to this point, the Heat are preparing for their first big break of the year with a full week off. Following Wednesday’s road trip, Laredo returns to action Thursday, June 9 hosting the Lubbock Matadors SC at 8 p.m. at the TAMIU Soccer Complex.

“We’re all very excited for it, but I don’t know if we’ve even thought about it in reality because we know the job at hand is a tough one,” Powell said. “We have to go on the road, and they are going to be a good team. They are going to have some different faces in there that we didn’t get to see. So we’ll think about that on the bus ride home.” 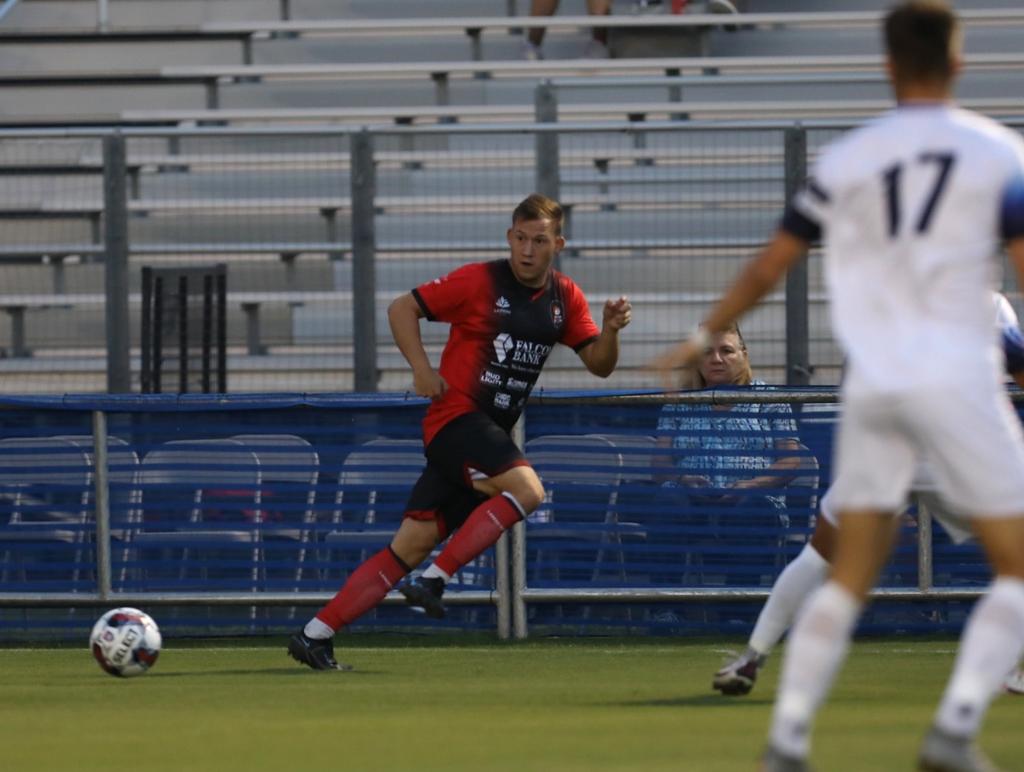 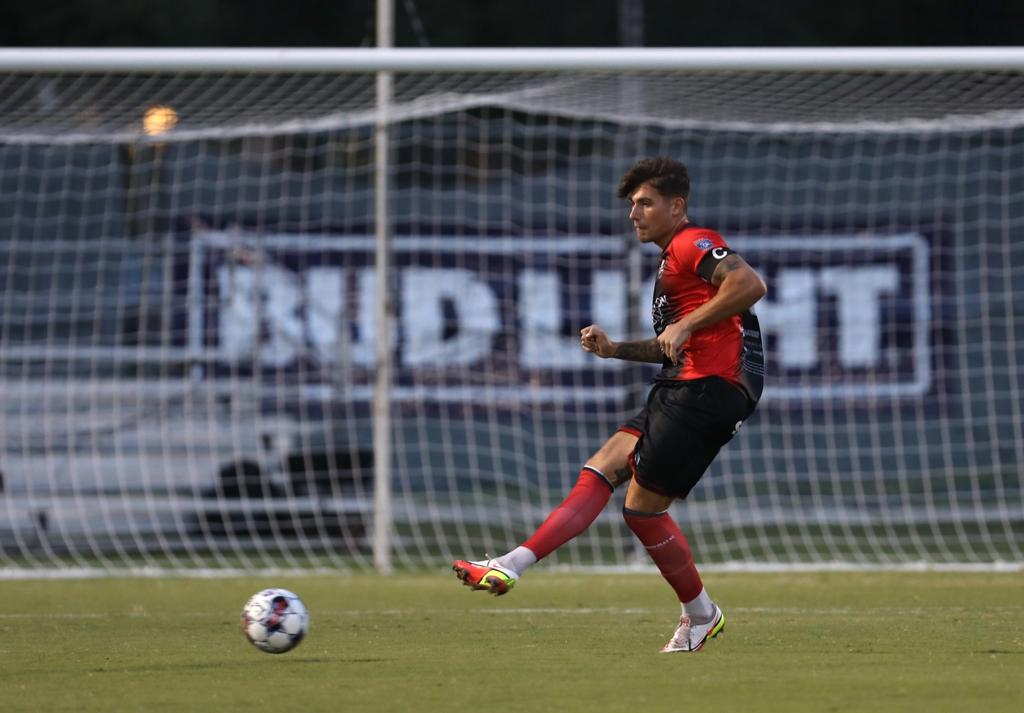 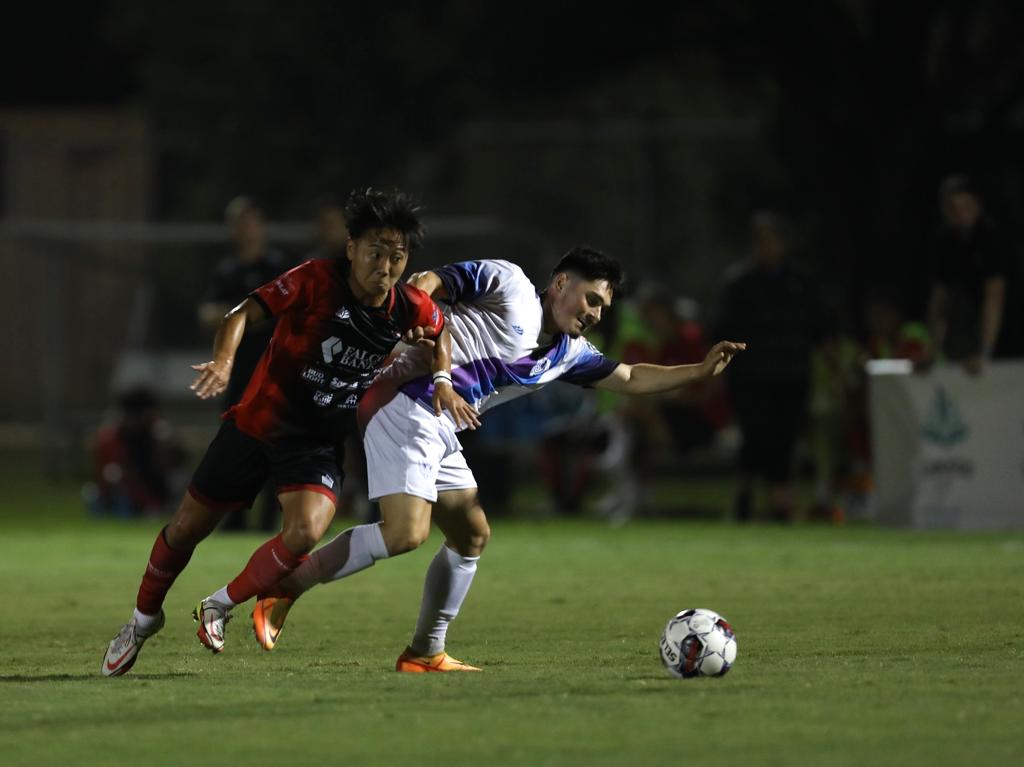 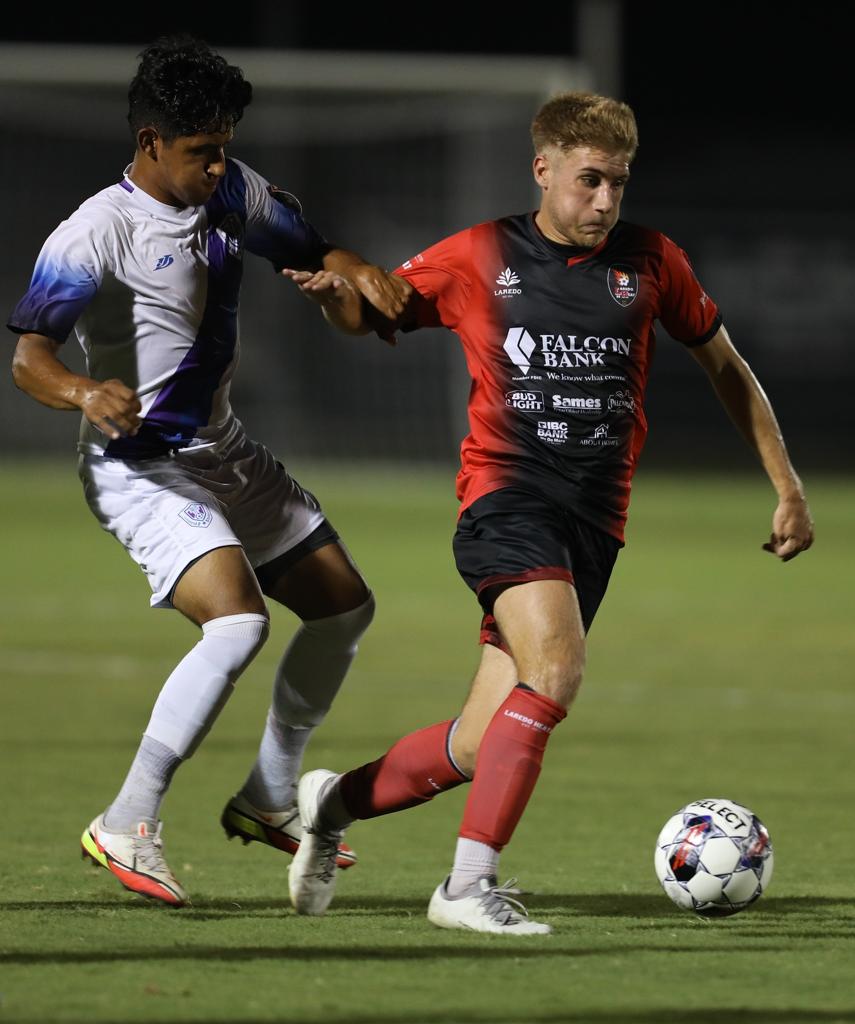 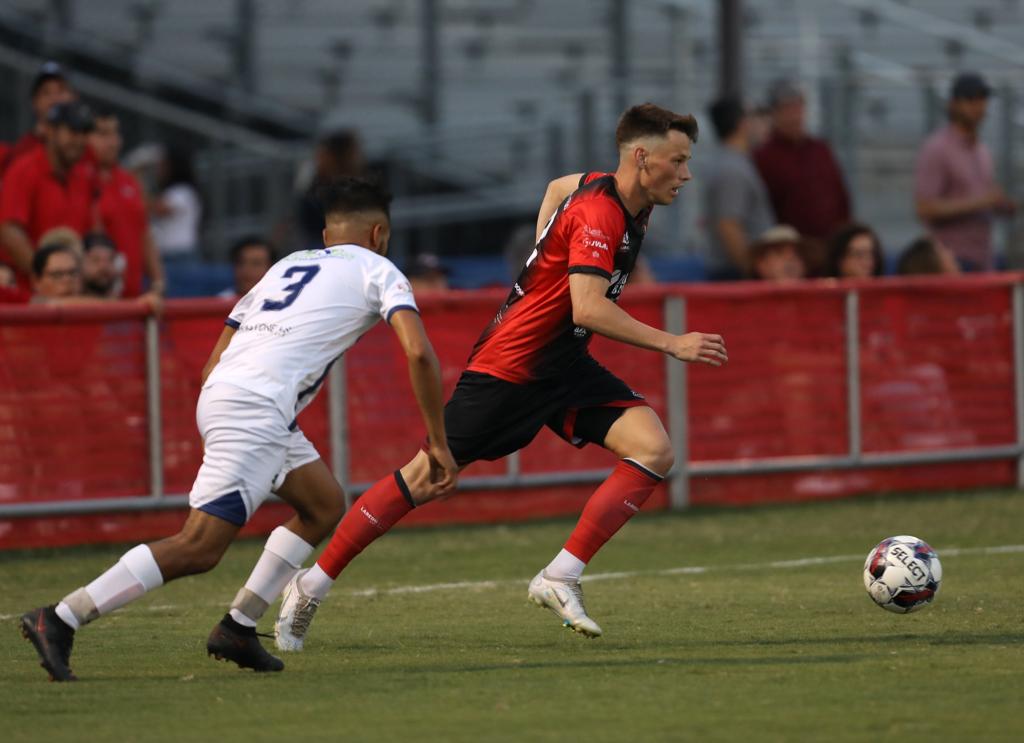